TypeScript has a structural type system. This means that the language does not depend on the origin of a type, when deciding if it’s compatible with another one, but it compares their members. If all the members of a type exist in another type with their appropriate types, then the two types are compatible.

In this article we will observe this behavior to understand it better. I will then explain the top level types that we have in TypeScript and how they are connected. We will also review the case of nullables, to understand how they relate to the other types.

We are used to the idea that an object is created from a class. And that’s true with TypeScript as well; you can use classes to create objects. But objects in TypeScript are not bound to their classes.

These types do not derive from any kind of parent class, like Animal for example. And yet they are interchangeable:

Observe what’s happening when I assign a cat to a dog. No errors whatsoever. Bot Cat and Dog have a name property of type string. The structural contract is fulfilled.

To spice things up, let’s introduce an Animal interface:

Our Animal interface is still not connected to our classes. To differentiate between the two classes, let’s add a bark() method to the Dog class:

As you may have guessed, our cat can be assigned without issues to an Animal object:

What about the Dog? Well, this will also work just fine:

Both Cat and Dog have the property name: string in common. That makes them compatible with Animal.

This doesn’t work both ways, because Dog has an additional method that Animal doesn’t support. If you try to assign an animal to a dog, you will get back an error:

We say that Dog extends Animal, because Dog contains all the members that Animal contains, and maybe some more. But the opposite, as we’ve seen, is not true.

I hope this gives you an overview of how a structural type system works in practice. It’s completely different from a nominal type system, in which the language is strictly checking for the origin of an object. In languages like Java for example, the examples above would not work, because Cat and Dog are completely unrelated classes, regardless of if they are similar.

Now a small reminder; If you want to check if an object is related to another one, you have to use the instanceof operator:

We are basically checking if the dog has the cat in its prototype chain. It certainly doesn’t.

So why is TypeScript that strange? 🙋‍♂️

Why is structural typing useful?

The reason this feature exists is to make the language backwards compatible with JavaScript applications. JavaScript is a dynamic language, and it never had strict types. TypeScript adds only a minimum set of rules, to enforce strict type checks in your code, by preserving the mechanics of the JavaScript language. This not only makes it backwards compatible, but it also requires less effort from your side to integrate it into your projects.

That’s how TypeScript won the race for strict typing languages. There were plenty of them out there, that were compiling to plain JavaScript. But nobody wants to write everything from scratch. Nobody wants to learn a new language. Such a shame, and yet a reality.

Existing JavaScript code will work as is in TypeScript, without any refactoring. That’s why structural types are useful.

A journey to TypeScript’s type universe

If we have to visualize the previous example, we will end up with the diagram below. Every bubble represents a type. As we’ve seen, types can be classes, type aliases, interfaces, or a union which is a combination of types. 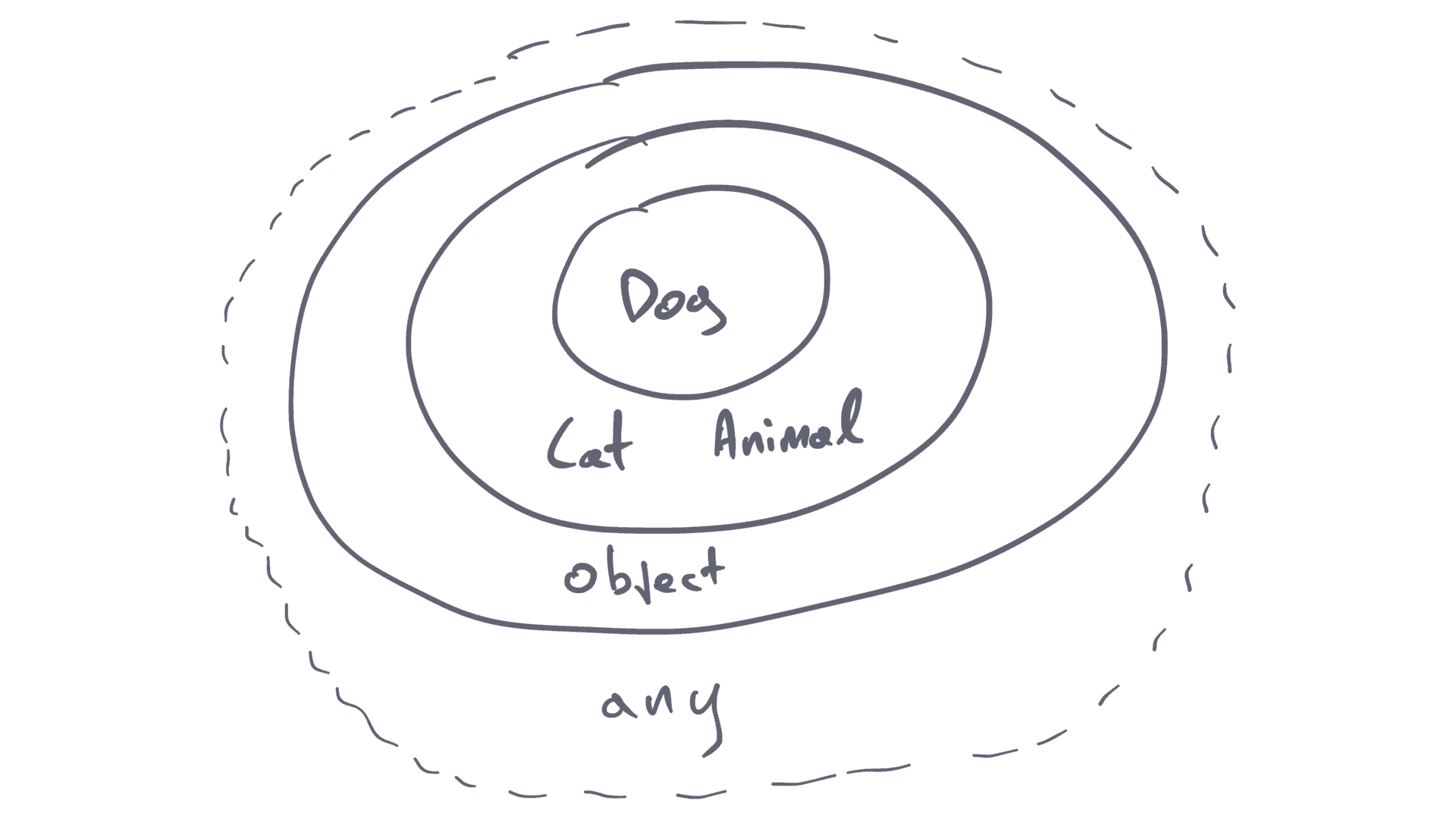 The Dog type can be assigned in bot the Cat and the Animal types. That logically doesn’t make sense, because the Animal is the logical parent of these two types. That’s the tricky part you need to understand with TypeScript. The same applies with the object type, which can accept any object structure. At the very top we have any, which can accept all the types.

The structural typing system doesn’t affect only object structures, but other kinds of types as well. The situation gets more complicated when you create unions, which can combine any types. I will explain how those are connected in the next articles.

For a birds-eye view, here are the top level types that are available in TypeScript: 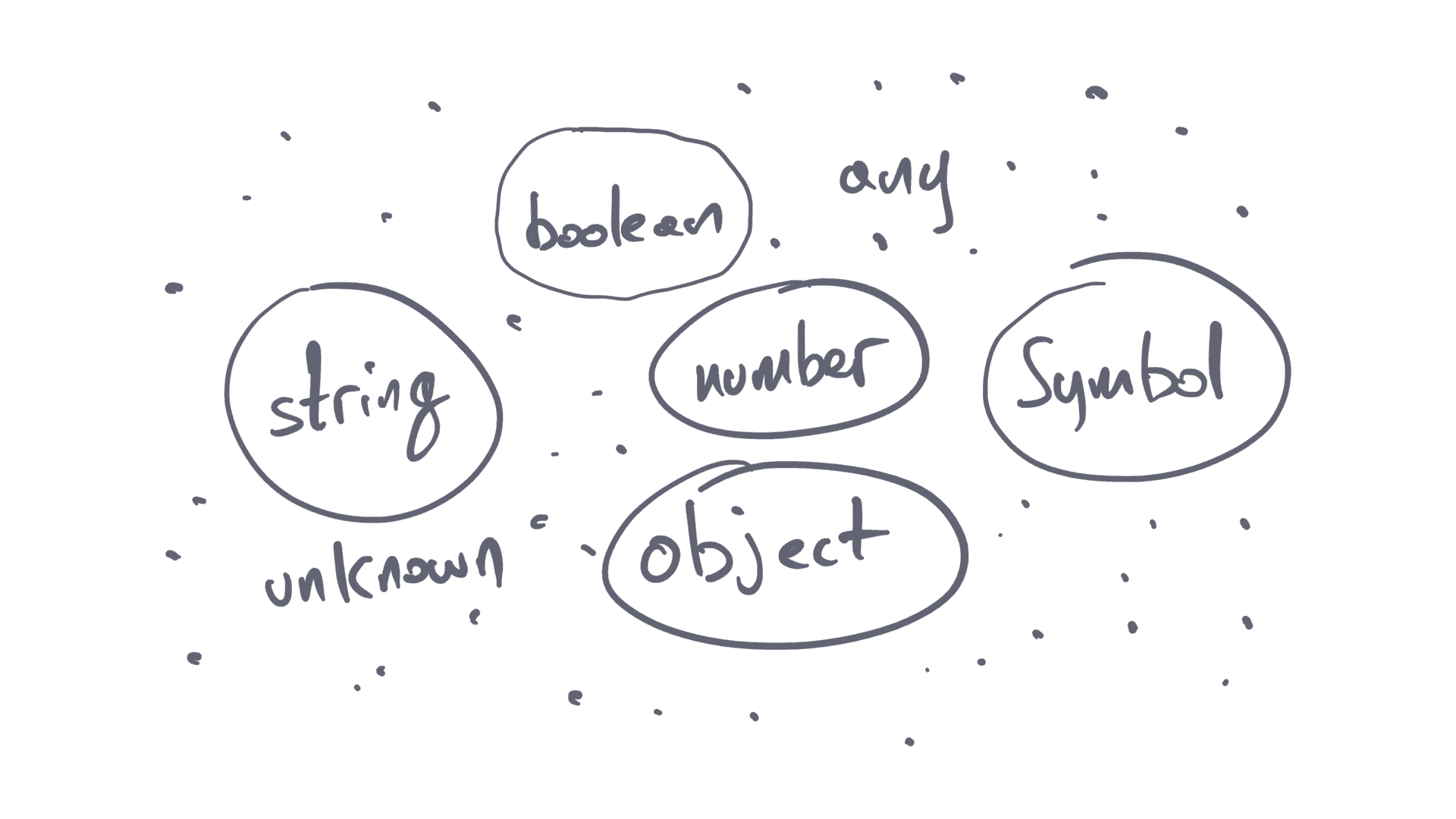 As you can see, the bubbles are completely independent here. That’s because they are not compatible with each other. You can’t assign an object to a boolean, for example.

Now, let’s zoom in, to see which values are compatible for each of them. Note that a number type can also include NaN. An object type can include any object declaration {}, arrays, regular expressions, dates, and the list goes on:

Next to these, TypeScript adds some special wildcard types: 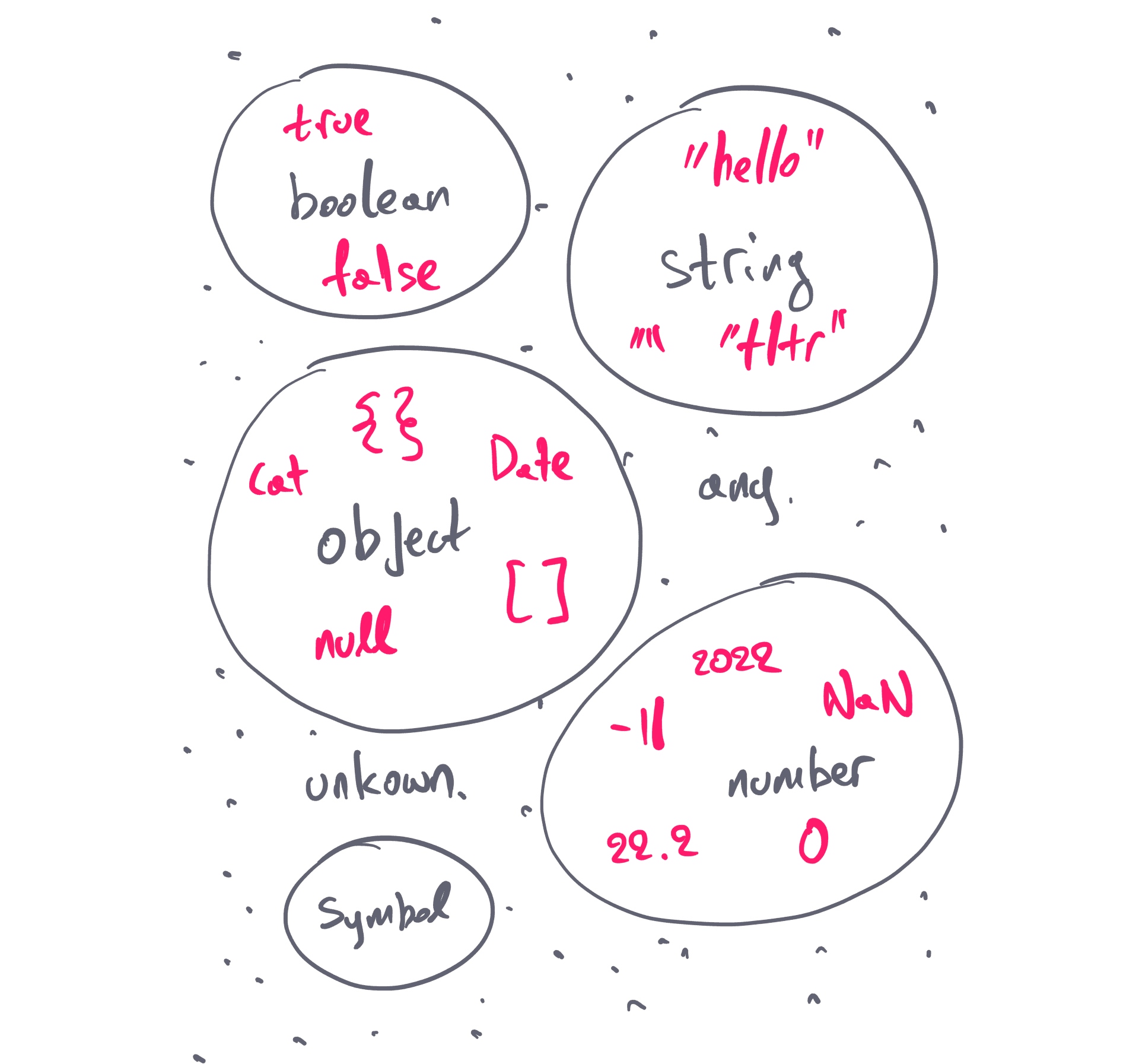 Of course, we can create our own custom types:

If you want to learn more details about the available types of TypeScript, I have another article which explains everything you need to know about them.

In JavaScript, we have the the following nullable primitive values:

Don’t be confused, nullable types are not valid types in TypeScript, but values that can be assigned to variables.

Yes, I hear you. You can set a variable to null or undefined:

In the previous examples, we have declared the variables alwaysUndefined and alwaysNull, which respectively can only accept undefined and null as allowed values. Here we are basically instructing TypeScript, to use the undefined and null values similar to how we use a string value “green” or a number value 123.

Now I want to make a small note here; TypeScript will not allow assigning null or undefined values to a variable by default. That’s only possible when you have specifically disabled strictNullChecks in the compiler configuration file, and you have set the strict mode set to off.

By default, strict mode is on, which sets all the strict flags to true. If you want to write robust code, you should definitely avoid having nullable variables.

The following will not work, if we have strict mode enabled, which is the default option:

This was a useful introduction that will help you create a mind map to have a holistic view on types in TypeScript. In my next posts, I will cover more ways you can dynamically generate type combinations. Until then, stay curious. 🤓